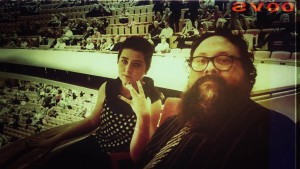 Megan and Jeff, sitting beside me in the loge — seats that we saw sitting empty from our perch in the top row of the balcony, and into which we moved at intermission, for a much more comfortable second half of the concert.

The notion that my big brother greeted his 50th year this month is pretty much incomprehensible to me.  It was hard to imagine a proper way to celebrate a birthday so momentous! That it happened within the same week that the final installment of The Hobbit hit the theaters was, however, fortuitous (remember, Bilbo Baggins started out on his adventure at the same age!).  Attending Lord of the Rings movies around his birthday became “a thing” back in 2001 with the release of The Fellowship of the Ring, and nothing could have crowned his 50th birthday more satisfactorily than to finish the series with the last Peter Jackson Middle Earth movie (which, despite their sometimes misguided digressions from the books, even being the geeks that we are, we all loved).  So, as soon as we knew the release date, it became “the thing” to do for his birthday.  However, by the time December rolled around, there were other “things” that were added to the roster of celebratory events, such that the whole month became one of celebration. In the first week, we attended the Phoenix Symphony Holiday Pops concert at Symphony Hall, in which Laurent sang with the Phoenix Symphony Chorus, Phoenix Girls Chorus, the Desert Bells, and of course the fantastic Phoenix Symphony, giving us an evening of top notch musical enjoyment.

Although it was a Wednesday, which meant that all the girls and Paul were at church for the evening, I was able to join Jeff and mom with the boys, as well as Koos and Talitha, to celebrate on the actual day by going to dinner at Ichi Ban for sushi and teppanyaki. Both the company and the table-side chef were delightful, and of course there was more beautifully presented and delicious food than we could possibly consume.

Then at the end of THAT week, we all got to go hear the Phoenix Symphony and Chorus again (though on different nights, so that someone could stay home with the little boys), performing Handel’s Messiah. What a joy that was. Mother, Jeff and I have all played it before of course, and mother and I have sung it, so it was terribly difficult to keep from singing along, or even to sit still, during such a phenomenal performance.  It really took my opinion of the Phoenix Symphony and their conductor, Tito Muñoz, through the roof. I am now conniving and scheming as to how I can acquire season tickets….

Once again, Megan, Mom and I were the lucky ones who got to accompany Jeff to the concert, along with Koos, who was available at the last minute to use a spare ticket.

It was Sunday night of that week before we finally got to do a family celebration with everyone present. Mom’s traditional Wacky Cake made it’s appearance in the form of cupcakes, and there was a decorating contest after the truck loads of Palermo’s Pizza that Jeff brought home.

And so we come to the coup de grace, the creme de la creme, the finale of the birthday month: The Hobbit: The Battle of the Five Armies. Due to the number of people Jeff had invited to see the show with him, and confusion about locations, Jeff was not able to attend the opener with the Shrader clan as had been tentatively planned, so some of us went with Jeff, and others — the more appropriately dressed — went with the Shraders. Would that we all had such regal attire! (Although some of us are less elvish and more, I don’t know, dwarvish?)

Jeff, however, really is simply a hobbit: he just loves to provide food, and movie tickets, and concert tickets, when it’s his own birthday. While I’m the biggest fan there will ever be of my brother’s giant brain and musical genius, I’m convinced that both his generous heart and his booming, room-filling, contagious laughter are a legacy that will inspire all that they have touched to give more freely, laugh more loudly, and glorify God in the sharing of His abundant gifts.

Here’s to the first half century, my brother – may the second half be an even greater adventure!