She is called “the Penitent”. St. Mary was given the name ‘Magdalen’ because, though aJewish girl, she lived in a Gentile town called Magdale, in northern Galilee, and her culture and manners were those of a Gentile. St. Luke records that she was a notorious sinner, and had seven devils removed from her. She was present at Our Lords’ Crucifixion, and with Joanna and Mary, the mother of James and Salome, at Jesus’ empty tomb. Fourteen years after Our Lord’s death, St. Mary was put in a boat by the Jews without sails or oars – along with Sts. Lazarus and Martha, St. Maximin (who baptized her), St. Sidonius (“the man born blind”), her maid Sera, and the body of St. Anne, the mother of the Blessed Virgin. They were sent drifting out to sea and landed on the shores of Southern France, where St. Mary spent the rest of her life as a contemplative in a cave known as Sainte-Baume. She was given the Holy Eucharist daily by angels as her only food, and died when she was 72. St. Mary was transported miraculously, just before she died, to the chapel of St. Maximin, where she received the last sacraments.

More about this saint: St. Mary Magdalen (Feast day – July 22) Mary Magdalen was well known as a sinner when she first saw Our Lord. She was very beautiful and very proud, but after she met Jesus, she felt great sorrow for her evil life. When Jesus went to supper at the home of a rich man named Simon, Mary came to weep at His feet. Then with her long beautiful hair, she wiped His feet dry and anointed them with expensive perfume. Some people were surprised that Jesus let such a sinner touch Him, but Our Lord could see into Mary’s heart, and He said: “Many sins are forgiven her, because she has loved very much.” Then to Mary He said kindly, “Your faith has made you safe; go in peace.” From then on, with the other holy women, Mary humbly served Jesus and His Apostles. When Our Lord was crucified, she was there at the foot of His cross, unafraid for herself, and thinking only of His sufferings. No wonder Jesus said of her: “She has loved much.” After Jesus’ body had been placed in the tomb, Mary went to anoint it with spices early Easter Sunday morning. Not finding the Sacred Body, she began to weep, and seeing someone whom she thought was the gardener, she asked him if he knew where the Body of her beloved Master had been taken. But then the person spoke in a voice she knew so well: “Mary!” It was Jesus, risen from the dead! He had chosen to show Himself first to Mary Magdalen, the repentent sinner. (Read more about Mary Magdalene)

O God,
whose Only Begotten Son entrusted Mary Magdalene before all others
with announcing the great joy of the Resurrection,
grant, we pray,
that through her intercession and example
we may proclaim the living Christ
and come to see him reigning in your glory.
Who lives and reigns with you in the unity of the Holy Spirit,
one God, for ever and ever.
Amen. 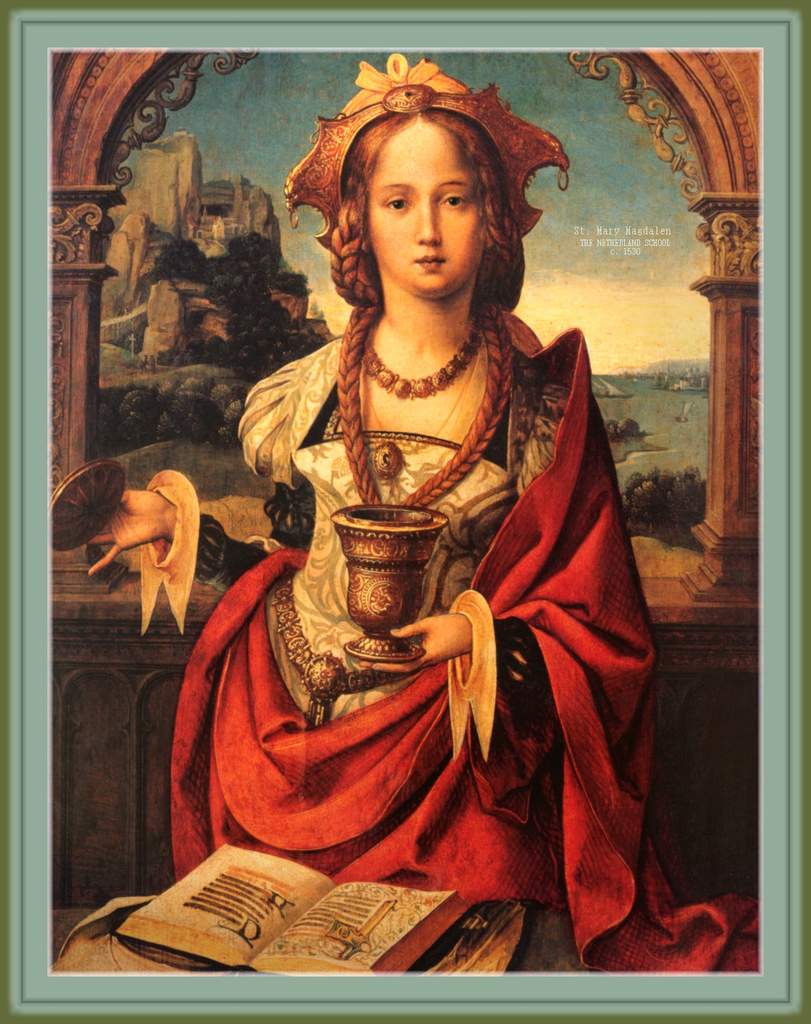