With a growing family including 10 kids plus miscellaneous other persons, it became incredibly unwieldy to travel anywhere with 3 vehicles. We decided in March to pare down the vehicular redundancy by consolidating. I researched the options in the large van market, and kept coming back to Nissan’s NV3500 – it had all the bells and whistles and then some, enough power to get us up the mountains without breaking a sweat whenever we want to go to the ranch, and room for the 12 of us. Plus (and this is important) I think it’s a really sweet looking van! This was, of course, a major purchase, and our first new vehicle ever. Considering that I would likely only have one opportunity to buy a new car in this lifetime, I made it count, and chose a RED one! 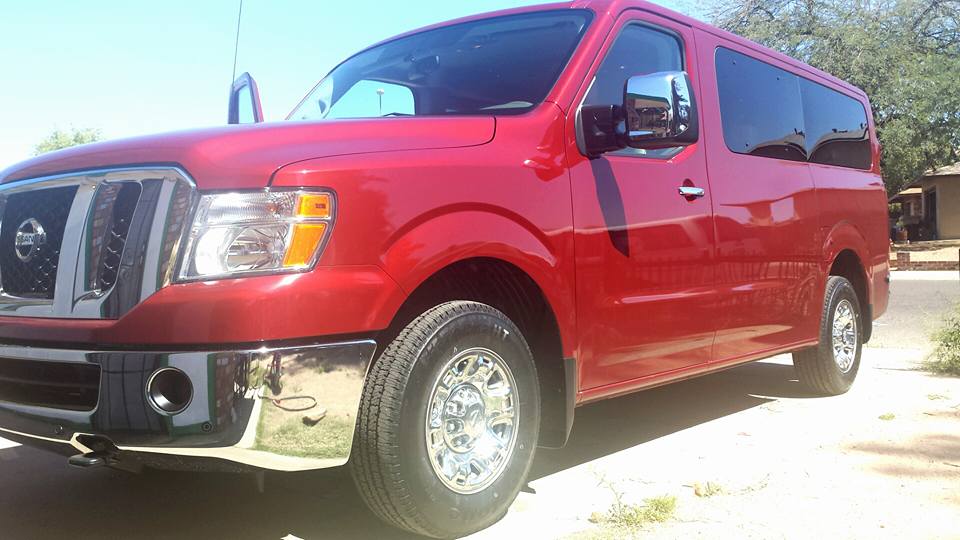 And once you have a van into which you can all easily fit, there’s only one thing to do, right? Right.

We had a Saturday when almost everyone was free, so we bundled ourselves in and took off up to Prescott to see some sights. We were planning to meet up with the East-valley Heidmanns for lunch, but we got to town early enough that we were able to stop at the Zoo and see a few animals first. We were among the first through the gates, which made for a relaxed and uncrowded time there. The highlight was probably the petting area with the goats, although the tiger was certainly impressive.

After our McD’s lunch break, we headed over to Goldwater Lake. We found it to be rather more crowded than the zoo had been, but after plunking our shtuff down at a picnic table near the playground, the bigger kids went a-wandering down to the lake to splash about, while the littles stayed up at the playground for a while, but eventually they all migrated down to the water. There was much splashing and hooliganing, none of which I got to see until later – I ended up having to send my camera down with Paul, as I was stuck babysitting the backpacks, etc. It all came to an abrupt halt when the 2yo took a faceplant in the lake and was brought back to me a-shivering. Having nothing into which to change her (great planning there, parents of 10 kids, well done you!) she was wrapped in Geneva’s sweater and thin cotton scarf and I warmed her chattering little self as best I could.

At that point we loaded back up and decided we had time to visit one more lake before the day was done, so we noodled around till we found Watson Lake and spent just a few minutes there. Not enough to really explore, and sadly for this photographer, there were all kinds of revelers mucking up my photoshoot with their kayaks and picnics and what not (the nerve!). I decided I probably need to get there around 5am if I want to have a pristine view! 🙂 Nonetheless the kids had a quick hike up over the hill and back with daddy, and played around the glassy pool a bit, and it was a very relaxing way to finish off our afternoon.

One thought on “Road Trip!”