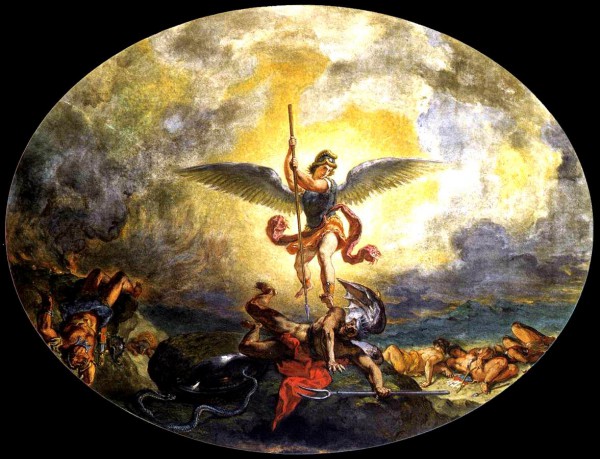 An article in the Roman journal Ephemerides Liturgicae (V. LXIX, pages 54–60) in 1955 gave an account in Latin and Italian of how the St. Michael prayer developed. Footnote nine of this account quotes an article in another Italian journal called La Settimana del Clero in 1947 by Fr. Domenico Pechenino who worked at the Vatican during the time of Leo XIII, in which he stated:

“I do not remember the exact year. One morning the great Pope Leo XIII had celebrated a Mass and, as usual, was attending a Mass of thanksgiving. Suddenly, we saw him raise his head and stare at something above the celebrant’s head. He was staring motionlessly, without batting an eye. His expression was one of horror and awe; the colour and look on his face changing rapidly. Something unusual and grave was happening in him.

“Finally, as though coming to his senses, he lightly but firmly tapped his hand and rose to his feet. He headed for his private office. His retinue followed anxiously and solicitously, whispering: ‘Holy Father, are you not feeling well? Do you need anything?’ He answered: ‘Nothing, nothing.’ About half an hour later, he called for the Secretary of the Congregation of Rites and, handing him a sheet of paper, requested that it be printed and sent to all the ordinaries around the world. What was that paper? It was the prayer that we recite with the people at the end of every Mass. It is the plea to Mary and the passionate request to the Prince of the heavenly host, (St. Michael: Saint Michael the Archangel, defend us in battle) beseeching God to send Satan back to hell.”

According to the same article in Ephemerides Liturgicae, Cardinal Giovanni Nasalli Rocca di Corneliano wrote in his Litteris Pastoralibus pro Quadragesima (Pastoral Letters for Lent) that “the sentence ‘The evil spirits who wander through the world for the ruin of souls’ has a historical explanation that was many times repeated by his private secretary, Monsignor Rinaldo Angeli. Leo XIII truly saw, in a vision, demonic spirits who were congregating on the Eternal City (Rome). The prayer that he asked all the Church to recite was the fruit of that experience. He would recite that prayer with strong, powerful voice: we heard it many a time in the Vatican Basilica. Leo XIII also personally wrote an exorcism that is included in the Roman Ritual. He recommended that bishops and priests read these exorcisms often in their dioceses and parishes. He himself would recite them often throughout the day.” 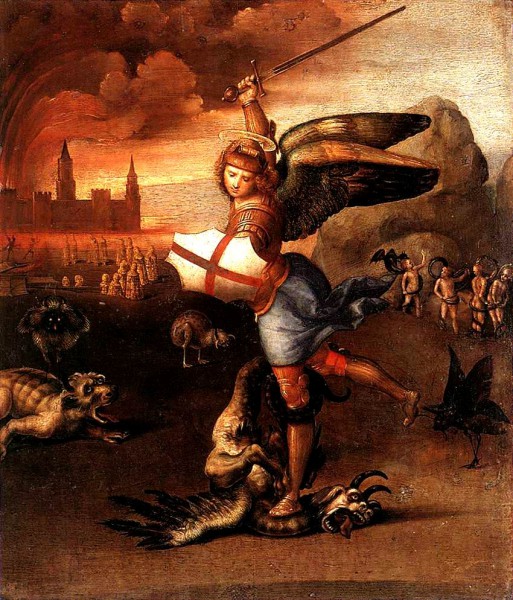 The Shorter Prayer to St. Michael the Archangel

Saint Michael the Archangel,
defend us in battle;
be our protection against the wickedness and snares of the devil.
May God rebuke him, we humbly pray:
and do thou, O Prince of the heavenly host,
by the power of God,
thrust into hell Satan and all the evil spirits
who prowl about the world seeking the ruin of souls.
Amen. 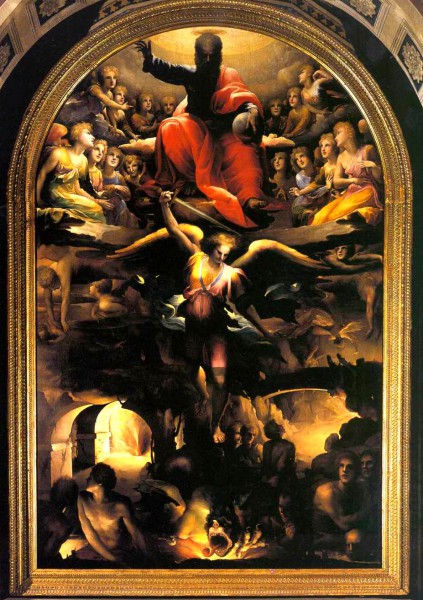 The Longer Prayer to St. Michael the Archangel

O Glorious Archangel St. Michael, Prince of the
heavenly host, be our defense in the terrible warfare
which we carry on against principalities and powers,
against the rulers of this world of darkness, and
spirits of evil. Come to the aid of man, whom God
created immortal, made in His own image and likeness,
and redeemed at a great price from the tyranny of the
devil. Fight this day the battle of the Lord, together
with the holy angels, as already thou hast fought the
leader of the proud angels, Lucifer, and his apostate
host, who were powerless to resist Thee, nor was there
place for them any longer in heaven. That cruel, that
ancient serpent, who is called the devil or Satan, who
seduces the whole world, was cast into the abyss with
his angels.

Behold, this primeval enemy and slayer of men has
taken courage. Transformed into an angel of light, he
wanders about with all the multitude of wicked
spirits, invading the earth in order to blot out the
name of God and of His Christ, to seize upon, slay and
cast into eternal perdition souls destined for the
crown of eternal glory. This wicked dragon pours out,
as a most impure flood, the venom of his malice on
men; his depraved mind, corrupt heart, his spirit of
lying, impiety, blasphemy, his pestilential breath of
impurity and of every vice and iniquity. These most
crafty enemies have filled and inebriated with gall
and bitterness the Church, the Spouse of the
Immaculate Lamb, and have laid impious hands on her
most sacred possessions. In the Holy Place itself,
where has been set up the See of the most holy Peter
and the Chair of Truth for the light of the world,
they have raised the throne of their abominable
impiety, with the iniquitous design that when the
Pastor has been struck, the sheep may be scattered.

Arise then, O invincible Prince, bring help against
the attacks of the lost spirits to the people of God,
and give them the victory. They venerate Thee as their
protector and patron; in Thee Holy Church glories as
her defense against the malicious power of hell; to
Thee has God entrusted the souls of men to be
established in heavenly beatitude. Oh, pray to the God
of peace that He may put Satan under our feet, so far
conquered that he may no longer be able to hold men in
captivity and harm the Church. Offer our prayers in
the sight of the Most High, so that they may quickly
conciliate the mercies of the Lord; and beating down
the dragon, the ancient serpent who is the devil and
Satan, do Thou again make him captive in the abyss,
that he may no longer seduce the nations. Amen.

V. Behold the Cross of the Lord; be scattered, hostile
powers.
R. The Lion of the tribe of Judah has conquered, the
root of David.
V. Let Thy mercies be upon us, O Lord
R. As we have hoped in Thee.
V. O Lord, hear my prayer.
R. And let my cry come unto Thee

LET US PRAY
God, the Father of our Lord Jesus Christ, we call upon
Thy holy name, and we humbly implore Thy clemency,
that by the intercession of Mary, ever Virgin
Immaculate and our Mother, and of the glorious
Archangel St. Michael, Thou wouldst deign to help us
against Satan and all other unclean spirits, who
wander about the world for the injury of the human
race and the ruin of souls. Amen.